Jimbo Fisher and the Aggies Need to Answer some Tough Questions COLLEGE STATION, TEXAS - APRIL 24: Head coach Jimbo Fisher of the Texas A&M Aggies calls out to a player during the first half of the spring game at Kyle Field on April 24, 2021 in College Station, Texas. (Photo by Carmen Mandato/Getty Images)
Share
Facebook Twitter LinkedIn Pinterest Email 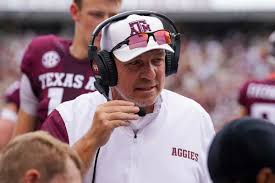 After an abysmal showing by Coach Jimbo Fisher and his Texas A&M Aggies last Saturday, which resulted in a 17-14 loss to Appalachian State, some serious questions need to be answered, and quickly.  The most pressing question mark facing Jimbo is the issues with the offense.

The bulk of the issues fall at the hands of the head coach. Jimbo Fisher has undoubtedly recruited very well since taking over at A&M, but is still facing similar offensive struggles from when he took over. With as many 4 and 5 star talents on the field the lack of efficiency and explosive plays is inexcusable. The talent is evident, but so is the lack of success.

This Leads to the Biggest question… Is Jimbo’s Scheme Outdated?

Modern football is about explosive offenses with simple enough concepts for players to grasp. This is especially true at the college level. Alabama has had such offenses throughout the second half of their dynasty. Oklahoma and now USC experience it with Lincoln Riley. LSU in 2019 under OC Joe Brady lived out this excitement. Many other schools also have great offenses, this is to name a few with similar talent levels as A&M. Yet with all that talent “offensive guru” Jimbo Fisher can’t get to their level.

Coach Fisher is using a scheme that was last successful for him in 2014, when Jameis Winston took Florida State to the playoff a year removed from winning a National Championship. All that to say that his pro-style, complex scheme can be successful with the right signal caller under center. However, when elite quarterback play isn’t present Fisher has to set his team up for success by implementing simplicity into the offense.

Where to go at Quarterback?

The most pivotal position in all of football is the Aggies biggest depth chart question mark, that is alarming. The three options at quarterback are third year Aggie Haynes King, LSU transfer Max Johnson, and highly coveted 5 star freshman Conner Weigman. Each could be provided with an argument for why they should be “the guy.” King has been in the offense the longest, which in Fisher’s complex scheme is certainly an advantage. Johnson is the only one of the three with valuable game experience, having started conference games at LSU in his two seasons in Baton Rouge. Weigman is often regarded as the most talented of the bunch, and was the second highest rated quarterback in the 2022 class according to 247 Sports.

Depending on one’s perspective the Aggies are facing a great opportunity or a great downfall over the next few weeks, starting on Saturday 9/17 when Mario Cristobal and Miami come to town. The schedule after that does not get any easier either as the Aggies begin conference play the next week. I am of the belief that A&M is facing a great opportunity, and will right the ship over the coming weeks.