Marty Schottenheimer was born September 23rd 1943 in the small town of Canonsburg, Pennsylvania. Schottenheimer was one of the most well known, and influential coaches across the National Football League. From San Diego to Pittsburgh it was hard to find a player or coach that was not influenced by this man. He coached Hall of Fame legends such as Ladainian Tomlinson, Bill Cowher, Ozzie Newsome and Harry Carson. Schottenheimer coached in the NFL for 21 years, he retired in 2007 with a 200-126-1 record.

Marty Schottenheimer was not just a coach, but a renowned college football player as well. He played Center and Linebacker for the University of Pittsburgh from 1962-1964. In his junior year, Schottenheimer helped the Panthers to a 9-1 record, the third ranked team in the nation.  During his time there, Schotty also earned three varsity letters, Second-Team All American as a Senior, and an invitation to the Senior Bowl and College All Stars game.

After graduating from Pitt he embarked on the path to play professional football. Marty drew interest from two different leagues as he entered the draft, the National Football League, and American Football League. He was drafted into both of these leagues, by the Baltimore Colts in the fourth round, and the Buffalo Bills in the seventh. He had a choice to make, and even though the NFL was the more prestigious league, he chose to play with the Bills. 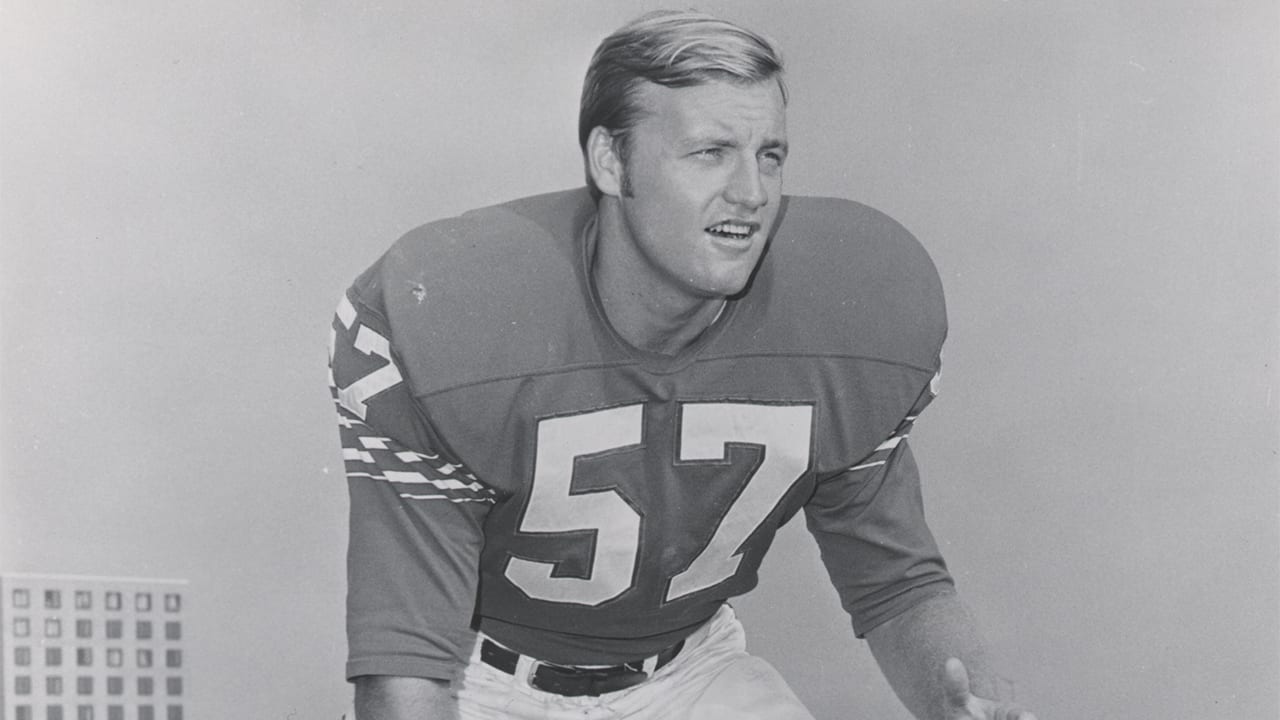 The linebacker helped the Buffalo Bills to win one of their two AFL Championships. He spent five seasons with the Bills before being traded to the Boston Patriots in 1969. Schottenheimer spent the ’69 and 70′ season with the Patriots before being traded to the Baltimore Colts ahead of the 1971 season. However, before playing even one snap with the Colts, Schottenheimer retired from the game of football.

After retiring from football, the former linebacker decided to try a career in Real Estate. But, when the World Football League was about to begin its inaugural season in 1974, Schottenheimer couldn’t stay away. He joined forces with the Portland Storm to fill the role of a player-coach. Unfortunately, he injured his shoulder ahead of the 1974 season and stayed with the team in the role of Linebackers Coach.

Schottenheimer got his chance to coach in the NFL as a Linebackers Coach for the New York Giants following his one year stint with the Storm. He coached in a variety of different roles across the league in Cleveland, Detroit, and Kansas City.

Schottenheimer got his first head coaching opportunity with the Cleveland Browns in 1984. He coached in one Super Bowl with the Browns where they ultimately lost to John Elway and the Denver Broncos. This was the game that ended when John Elway constructed “The Drive” bringing Denver their first Super Bowl in franchise history. In 1988 Schottenheimers team would return to the post season to fall to the Houston Oilers in the divisional round. The Head Coach stepped down in 1988 and was signed on by the Kansas City Chiefs as a Head Coach. 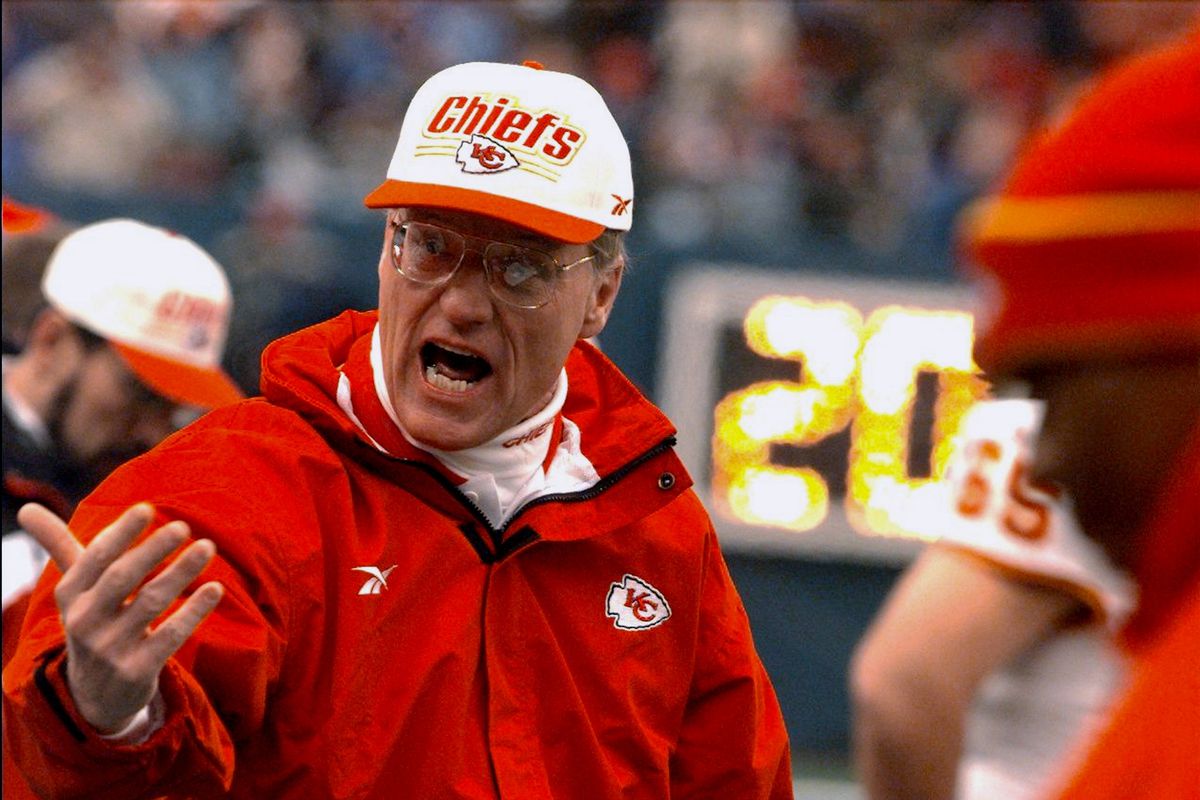 Marty never spent a particularly long time unemployed during his NFL career. Following the single season in Washington, Charger’s owner Dean Spanos brought Schottenheimer in to fix a franchise that struggled under Head Coach Mike Riley. In his first two seasons Head Coach, Schottenheimer led the franchise to an 8-8, and 4-12 season respectively. However, the 2004 season had Charger’s fans praising Schotty, bringing the Charger’s to a 12-4 record with future Hall of Famer Drew Brees leading the offense. Then, disappointment struck the Chargers when they were bounced out of the Wild Card round by the Jets. Schottenheimer received the Coach of the Year award in 2004, along with his Quarterback Drew Brees earning the NFL’s Comeback Player of the Year award.

The following season, the Chargers posted a disappointing 9-7 record. This would end up being Drew Brees final season in the powder blues as third year Quarterback Philip Rivers was set to take the reigns. In Rivers first year as the Chargers starter Schottenheimer lead them to a 14-2 record. This would prove to be the best regular season record of Schottenheimers career. 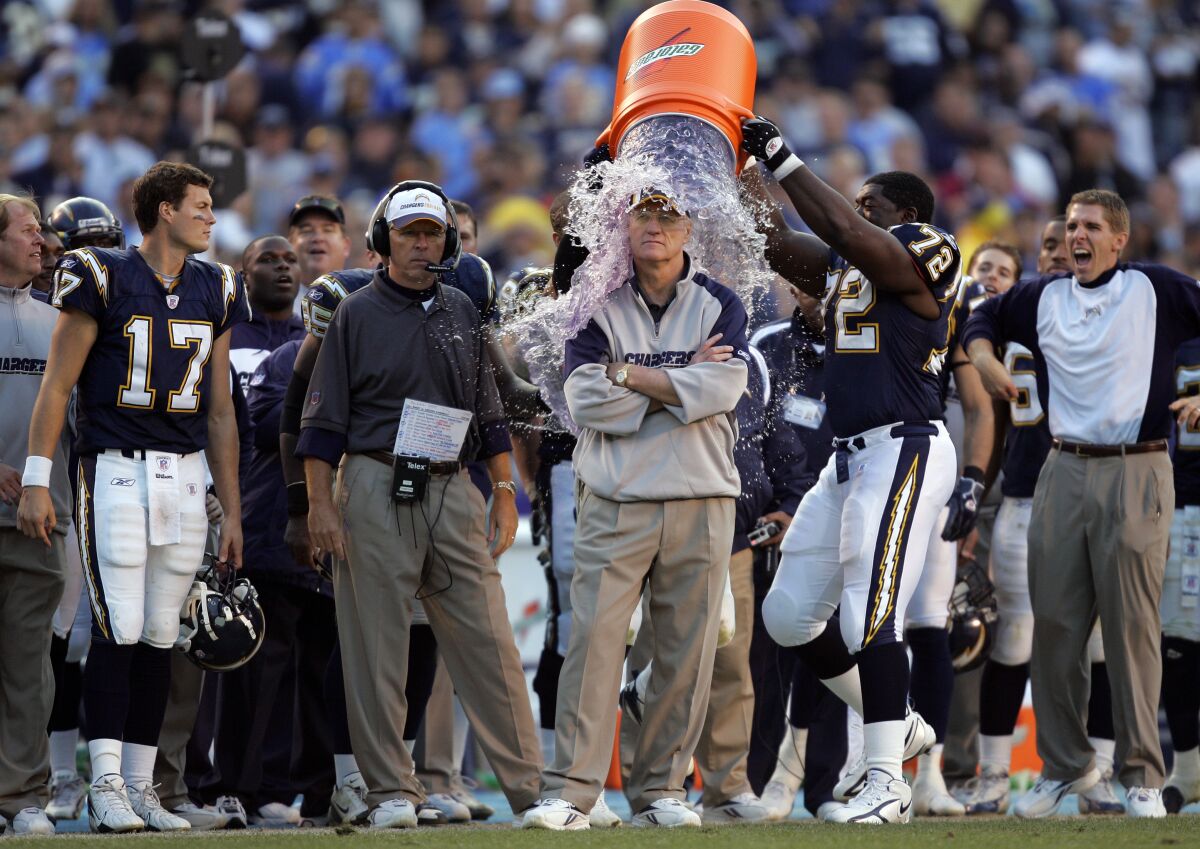 The number one seeded San Diego Chargers were set to face off against none other than Tom Brady and the New England Patriots. Unfortunately, because of a 53-yard Nate Kaeding missed field goal, the Chargers were sent home. The Patriots would go on to lose the Conference Championship to Peyton Manning and the Colts.

Following the post season, Owner Dean Spanos came on record saying the Head Coach would return for the final year of his deal. However, Schottenheimer ultimately declined the one year extension for the 2008 season. When he declined this option, the coaches assistants started to move on to pursue coaching positions of their own. On February 12th 2007, Marty Schottenheimer was unexpectedly fired. When Spanos was asked about the firing, he stated:

“When I decided to move ahead with Marty Schottenheimer in mid-January, I did so with the expectation that the core of his fine coaching staff would remain intact. Unfortunately, that did not prove to be the case. The process of dealing with these coaching changes convinced me that we simply could not move forward with such dysfunction between our head coach and general manager”

After being retired for four years, Schottenheimer would join the UFL’s Virginia Destroyers. He coached the Destroyers to a 4-1 record earning a playoff berth for the team. In the UFL Championship, Schotty and the Destroyers upset the two-time Las Vegas Locomotives 17-3. Marty had finally earned his Championship.

Some people come into your life and end up changing your world…
The lessons Marty taught me reached far beyond the football field. For that, I will forever be grateful to him and the entire Schottenheimer family.
Rest in peace coach! pic.twitter.com/EpZTHkVRDT

In 2011, Marty Schottenheimer was diagnosed with Alzheimer’s disease. His disease progressed slowly, but in February 2021 he was placed in hospice care. The long time father, husband, and coach passed on February 8th, 2021. He leaves behind a wife, Pat Schottenheimer, and two children, Kristin and Brian. Brian is still involved with the game today serving as a coaching analyst for the Dallas Cowboys.

Marty, you always said, "There's a gleam, men!" It's true, and that gleam is, and always was, YOU. Rest in peace Coach, love you. pic.twitter.com/PONiVZxm8f